Researchers from the University of California at San Diego have published a recent study in the journal Carcinogenesis that showed that Bitter Melon Juice (BMJ) caused cell death in four lines of pancreatic cancer cells, and appeared to inhibit pancreatic cancer tumor (ductal adenocarcinoma of the pancreas) activity in mice.

The fruit of the vine Momordica Charantia is called by many names: bitter melon, bitter gourd, bitter squash, goya, and karavella are but a few of these.  It is found widely in Asia, Africa and in the Caribbean.  And as the names implies it is perhaps the bitterest of fruits.  Bitter melon is used as an ingredient in specialty cooking in many parts of the world.

Also Bitter melon has been studied in several medical conditions and been found to inhibit breast cancer cells, function as an anti-malarial agent, generally be antibiotic, oppose nematodes (parasitic worms), contain substances which may reduce diabetes mellitus, and generally has been used for many purposes of folk medicine.  The seeds of the fruit are reported to be toxic for children; and the fruit is contraindicated in pregnancy.

This study is preliminary, and the results need to be validated and further explored.  Pancreatica does not particularly endorse the use of this agent, but we do try to include scientific studies on alternative treatments whenever possible 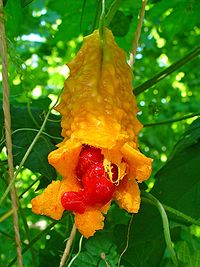 This article was posted in Pancreatic Cancer | Bookmark the permalink | Both comments and trackbacks are closed.